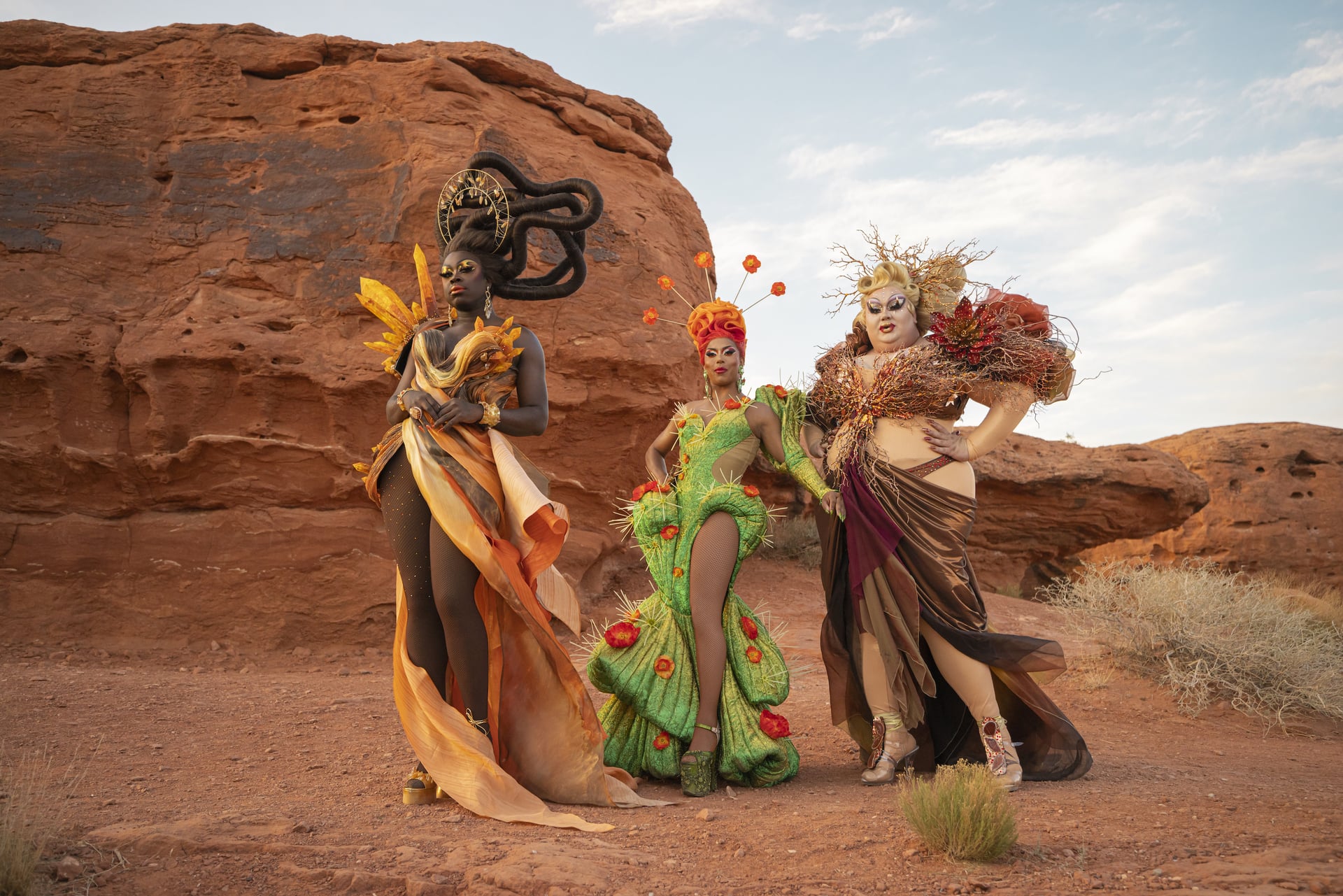 It’s raining in New York this November morning, one of the first really cold rains of the season. But Shangela’s suite at an upscale Manhattan hotel is warm and floral. Orchestral Taylor Swift plays in the background, and a candle burns on her coffee table.

Shangela loves a scented candle. Lighting one is part of her self-care routine after long days filming “We’re Here.” The unscripted series follows “RuPaul’s Drag Race” alums Shangela, Eureka O’Hara, and Bob the Drag Queen (who won “Drag Race” season eight) as they travel to small towns across the United States to support newly minted drag children in putting on a celebratory revue.

In the final scene of each episode, the queens’ drag children perform. The queer and trans performers, many of them people of color, bathe in the cathartic roar of community support many didn’t know they had. The straight participants also transform in solidarity with their LGBTQ+ loved ones, the cis men’s shells of masculinity cracking like eggs, exposing their glistening femininity to the rainbow lights. Each episode has bathed me in tears, popping the grape skin of that place inside me that holds the sugary pain of queerness and letting it drain.

This morning, I’m interviewing the queens about season three, which drops on HBO on Nov. 25. They’re all in New York City at the same hotel, getting prepped for a big day of press, their hair and makeup teams swirling around them in their respective rooms. Despite the gloomy weather and early wakeup call, Shangela’s warmth fills her suite like a radiator.

“I think it’s very important to put on an armor of self-love and confidence to go out into the world,” she says. Today, her armor is red satin: a dress with a short, off-the-shoulder sleeve; a gathered slitted skirt; and a boned sweetheart bodice. Her jewelry adds gold accents. “I thought I’d go for something very Mariah Carey-inspired today,” she quips.

Cozy with the scent of Zen Garden and Shangela’s visceral glamor, the room feels safe. These days, the landscape for LGBTQ+ people is anything but. In 2022, lawmakers across the United States introduced 155 pieces of anti-trans legislation alone. Fascist groups across the country showed up to threaten numerous Pride and drag events — in at least one instance, onlookers reported, with the apparent complicity of police.

And what the queens and I don’t know in the Manhattan hotel is that just four days later, a man with a gun would enter a queer nightclub in Colorado Springs, CO, during a drag show. He would kill five people and injure at least 18.

The queens encountered racism and heterosexism in many of the towns they visited in seasons one and two of “We’re Here.” But in season three, the queer- and transphobia coils more tightly with violence. In the town of St. George, UT, a city official resigned amid backlash for granting a permit for the “We’re Here” drag show. In Granbury, TX, Shangela is forced to relocate a Drag Queen Story Hour after the first venue receives threats.

Similar threats to Drag Queen Story Hours have repeatedly made headlines this year. I ask Shangela about the underlying — and false — accusation that queer and trans people are more likely to harm children. After all, I say, “The kids are queer and trans!”

“Honey, they are,” Shangela replies. “And it’s important for them to know that they are not alone in their own identity. They are not weird or different. They shouldn’t be ostracized or hidden.”

“My drag and my Blackness and my activism and my queerness have always been — they’re really interwoven.”

As Shangela puts the finishing touches on her look, I navigate a labyrinth of hallways and elevators to Bob the Drag Queen’s room. Bob, too, affirms that what harms kids is discrimination, not representation. The slurs against queer role models are “a tactic by conservatives, because when you say you’re just protecting kids, you can justify anything,” she says.

Bob floats into her suite’s sitting room wearing a golden trapeze dress, small pearls embellishing a net overskirt. Her updo is a heavy beehive the color of dripping honey. The dress was made by Godoy and inspired by Angeria on “RuPaul’s Drag Race.” “It’s very comfortable,” she says, perfect for a long day of press. “When I’m uncomfortable, I become a monster. I just want to be as comfortable as possible, for the sake of those around me.”

Since at least the 1700s, dominant European and white American culture has accused folks we’d today call queer and trans of monstrosity. This violent desire to control those who defy the gender binary, combined with white supremacy, underlies the anti-trans legislation and rhetoric we see today.

In Granbury, the first episode of season three, the queens reclaim this monstrosity by staging a freak-show-themed drag performance. Freak shows were historically a way for white European and American society to dehumanize colonized and disabled people. In the “We’re Here” freak show, however, Eureka emerges on stage radiant in her fat queerness. She wears enormous prosthetics resembling an alien from a horror movie, evoking the aesthetic lineage of tentacled drag queens. 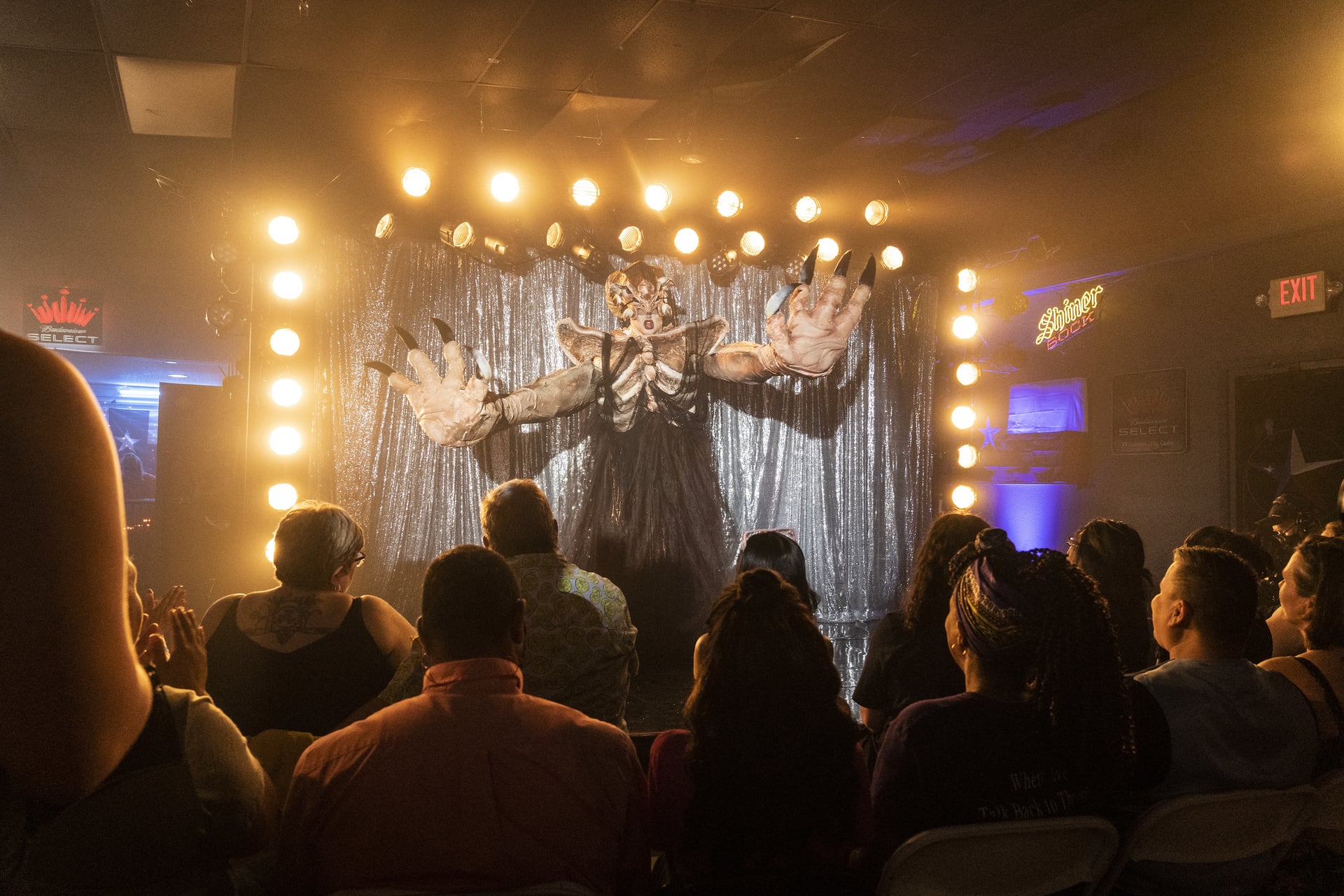 Drag has always been political, a means for marginalized people — especially Black trans femmes — to control their own narrative. When she was in her 20s in New York, Bob did activism in drag as part of a series of wedding-themed protest performances for marriage equality.

“My drag and my Blackness and my activism and my queerness have always been — they’re really interwoven,” she tells me. “It’s like threads in a sheet. You can’t separate the web without destroying the sheet.”

She draws on the legacy of Black queer and trans resistance in her new single, “Black.” I ask her about the music video’s protest imagery — Black queer folks triumphing over hooded figures, Jan. 6 insurrectionists, and a police car — and how she connects it to “We’re Here.”

“A lot of times, queer people in spaces feel just kinda unsafe around police officials. And I think that’s fair,” Bob explains. “I mean, the whole queer liberation started with an uprising against the police.”

Shangela, Bob, and Eureka are threatened with the possibility of police violence in season one, when a Branson, MO, resident calls the cops on them simply for existing in public.

“We actually ended up having an officer on our show,” Bob tells me. “I was like, ‘Whoa, if I’m going to be with an officer, I’m going to talk about these issues.'”

This is news to me, but Eureka later confirms that the trio take on a police officer as one of their drag children. The episode, which I haven’t seen, comes later on in season three.

“This is a queer person that chose this line of profession,” Eureka says, explaining the show treats the police officer’s experience of gender. “So more than ever, of course we’re going to show up and support that person, regardless of issues with blue lives, or police issues, or anything to that nature.” Later in our conversation, Eureka poses: “What does a police officer look like that represents us in that world? Do we have allies in the police force?”

It’s a question the modern queer movement has long asked — and which many of us have answered with a resounding “no.” It isn’t just that LGBTQ+ people don’t have allies among the police — for many, there is a fundamental incompatibility between the institution of policing and the goal of queer liberation.

As Bob reminds us, Pride began as a series of riots against police at places like Stonewall and Compton’s Cafeteria. These uprisings were led by drag queens and Black trans women and femmes, like Marsha P. Johnson.

The state violence that instigated these riots hasn’t gone away. In the past several years, police have arrested and brutalized protesters for LGBTQ+ and Black liberation at Prides and protests across the country. Prison and policing systems subject queer and trans folks to violence every day — from the ongoing threats to queer families in Texas and beyond to the traumatic impacts of incarceration on trans people.

Inspired by the work of Black abolitionist queer and feminist thinkers like Angela Davis and the Black-led 2020 uprisings against racism, multiple events, such as Abolitionist Pride, have created police-free spaces for LGBTQ+ protest and celebration. Activist efforts have also led Prides in New York and San Francisco to either ban or limit uniformed police.

When I went to interview the cast of “We’re Here,” I thought, naively, that I’d be able to write a simple, cute piece about the importance of visibility. But queer culture teaches us it’s never that easy.

“If I’m not in pain, I don’t feel like I’m fully in drag,” Eureka says, referring to the squeeze of the corset she dons as she gets ready. The corset is a metaphor for gender itself — the way it hurts even when it fits, even when it’s beautiful.

As I write this, many of the people who were shot in Colorado Springs remain in the hospital. Communities continue to mourn those who were killed. It’s a painful detail that, on Saturday night, the crowd had gathered to celebrate trans lives in honor of Transgender Day of Remembrance. Grief nests within grief. What would it take to make a world in which the loved ones we’ve lost still lived?

I think of how “We’re Here” — in its centering of Black, Indigenous, and trans queer narratives — reminds us that coming out is for all of us but especially for those most marginalized. Coming out — being able to move outside in freedom and having a safe place to come home to — is for the person trying a femme look for the first time (Shangela recommends a dab of perfume). For the baby queer trapped in a hostile family. For all our queer and trans siblings who are incarcerated.

One day, I know — because our elders passed their hope to us — the pain of the corset will only be the corset. One day, we will glue on our lashes and look up to see a liberated world.