Notorious B.I.G. (real name Christopher Wallace) is being honored with a limited edition pair of sneakers to mark the Jordan year (2023) of hip-hop‘s 50th anniversary.

The limited-edition Air Jordan shoe was unveiled on the late rapper’s official Instagram page as a partnership between the sneaker brand and The Christopher Wallace Memorial Foundation. They’re currently up for grabs at the auction, with bids starting at $1.

Like Biggie himself, the shoes have a lot to offer — including a tongue with a silhouette of the legendary rapper. The sneakers’ tongue tag highlights Biggie‘s well-known lyrics “It Was All A Dream” and “If You Don’t Know, Now You Know.”

The word “Dream” is embroidered on the shoelaces, the sock liner is made of a traditional red and black plaid pattern and the insole has a special-edition inspired print. 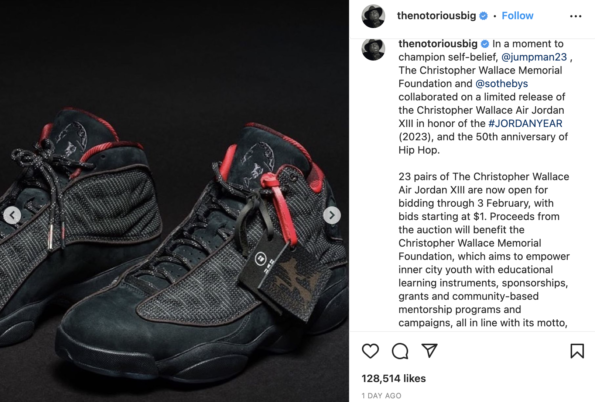 According to the caption of a photo that shows the finer details of the sneaker:

In line with its motto, Think B.I.G. ‘Books Instead of Guns,’ the auction’s proceeds will benefit the Christopher Wallace Memorial Foundation.

“23 pairs of The Christopher Wallace Air Jordan XIII are now open for bidding through 3 February, with bids starting at $1. Proceeds from the auction will benefit the Christopher Wallace Memorial Foundation, which aims to empower inner city youth with educational learning instruments, sponsorships, grants and community-based mentorship programs and campaigns, all in line with its motto, Think B.I.G. “Books Instead of Guns.” 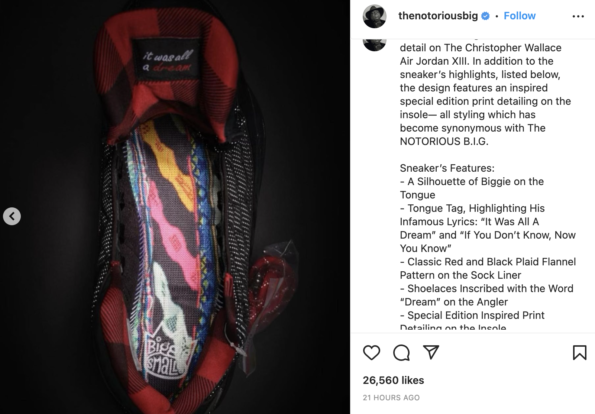 Biggie — who signed with Bad Boy Records when it launched in 1993 — is known to be one of the greatest rappers of all time.

The Brooklyn native was killed in a drive-by shooting on March 9, 1997, at the young age of 24. He reportedly attended a Soul Train Awards after-party along with artists Faith Evans, Aaliyah, and members of the Bloods and Crips gang the night of his murder. Law enforcement shut the event down due to overcrowding, prompting Biggie and his entourage to leave in two GMC Suburbans to return to his hotel. Shortly after, he was shot four times.

His death came six months after rapper Tupac Shakur was killed in a drive-by shooting in Las Vegas. 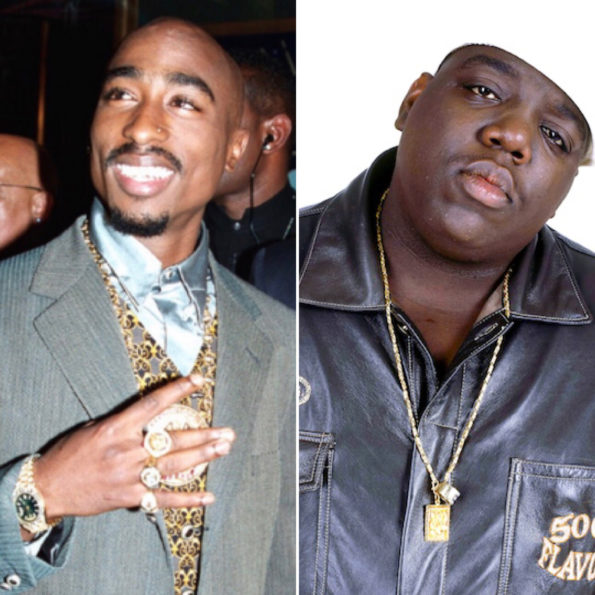 The shoes will be on display at Sotheby’s New York galleries from Monday (Jan. 23) through Feb. 3.

Are you planning to view (or bid on) the sneakers honoring the Notorious B.I.G.? Let us know in the comments!