The discovery of gold at Sutter’s Mill in January 1848 sparked a mass migration to California — but not everyone was lucky enough to strike it rich.

An advertisement for a steam ship company during the California gold rush.Wikimedia Commons

The vast majority of prospectors were men, but women went west during the California gold rush as well.

A miner holding a pickaxe and a pan of gold. Canadian Photography Institute

Two miners pose for a photo with their pickaxes.Canadian Photography Institute

A prospector panning for gold. Altogether, miners would extract some $2 billion worth of the precious metal during the gold rush. Wikimedia Commons

A Chinese prospector pans for gold in this photo from 1852. As word of the gold rush spread, immigrants came from far-flung places like China, Peru, and Europe. Gado/Getty Images

A portrait of a prospector in 1852. Canadian Photography Institute

A gold miner on an aqueduct at Brown’s Flat in Tuolumne County, California, during the California gold rush.Bettmann/Getty Images

A portrait of a California gold miner.Sepia Times/Universal Images Group via Getty Images

A Black prospector during the California gold rush. Public Domain

A group of gold miners in the 1850s. Gado/Getty Images

The entrance of Golden Rule Mine in California.Wikimedia Commons

A group of miners with horse-drawn carriages in front of several structures, one of which appears to be a store.Canadian Photography Institute

Miners searching for gold in a sluice.Wikimedia Commons

Men standing outside of a mine shaft. The National Archives

A prospector holds a pickaxe and a shovel in this portrait from the California gold rush.Canadian Photography Institute

Miners looking for gold alongside a river. Canadian Photography Institute

A mining town. New settlements sprung up during the California gold rush with names like Hangtown, Sucker Flat, and Murderers Bar.

The influx of people to California also gave a boost to cities like San Francisco and Sacramento.

A prospector with a shovel and pickaxe. 1852.Spencer Weiner/Los Angeles Times via Getty Images

A colorized photo of a group of prospectors — including men, women, and children — during the California gold rush. 1852.Gado/Getty Images

A group of men pose as they read news about the California gold rush.Sepia Times/Universal Images Group via Getty Images

Prospectors using a water wheel to mine the North Fork of the American River near Sacramento, California. Circa 1850.Gado/Getty Images

Wagons and cable cars in San Francisco during the California gold rush. As people poured into the city, San Francisco became an important destination. Library of Congress/Corbis/VCG via Getty Images

Ships moored outside of San Francisco Bay during the California gold rush.

Americans coming from the East Coast often sailed around Cape Horn or traversed Panama to get to California.

Wells Fargo was established during the California gold rush. Responding to the need for cross-country shipping, the business initially transported items from the East Coast to California.Underwood Archives/Getty Images 33 Incredible Photos From The California Gold Rush, The Mining Craze That Captivated The World

In 1848, a carpenter building a sawmill near Coloma, California, caught a glimpse of something glittering along the banks of the American River. It was gold. And his discovery would launch the California gold rush, a frantic, hopeful, and transformative period in American history.

Seeking riches, hundreds of thousands of people — mostly men, but some women, too — flooded the territory. Borrowing money or using their life savings, they came from the East Coast, Europe, and even China. From roughly 1848 until 1855, they mined for gold across the state, eventually extracting some $2 billion worth of the precious metal.

This mass migration transformed the territory forever. But the California gold rush also altered the course of American history in more ways than one.

‘It Made My Heart Thump’: The Discovery Of Gold In California

The California gold rush began on Jan. 24, 1848. Then, as carpenter James Wilson Marshall worked on a water-powered sawmill for his employer, Swiss immigrant John Sutter, he noticed something shiny in a streambed.

“My eye was caught by something shining in the bottom of the ditch,” Marshall later recounted of his discovery, according to the Library of Congress. “I reached my hand down and picked it up; it made my heart thump, for I was certain it was gold… Then I saw another.”

Marshall’s find came at a serendipitous time for the United States. As PBS reports, the Treaty of Guadalupe Hidalgo was signed in February 1848 just weeks after Marshall’s discovery, ending the Mexican-American War and ceding gold-rich California to the United States. At the time, no one knew that Marshall, Sutter, and their workmen had started to dig for the precious metal. 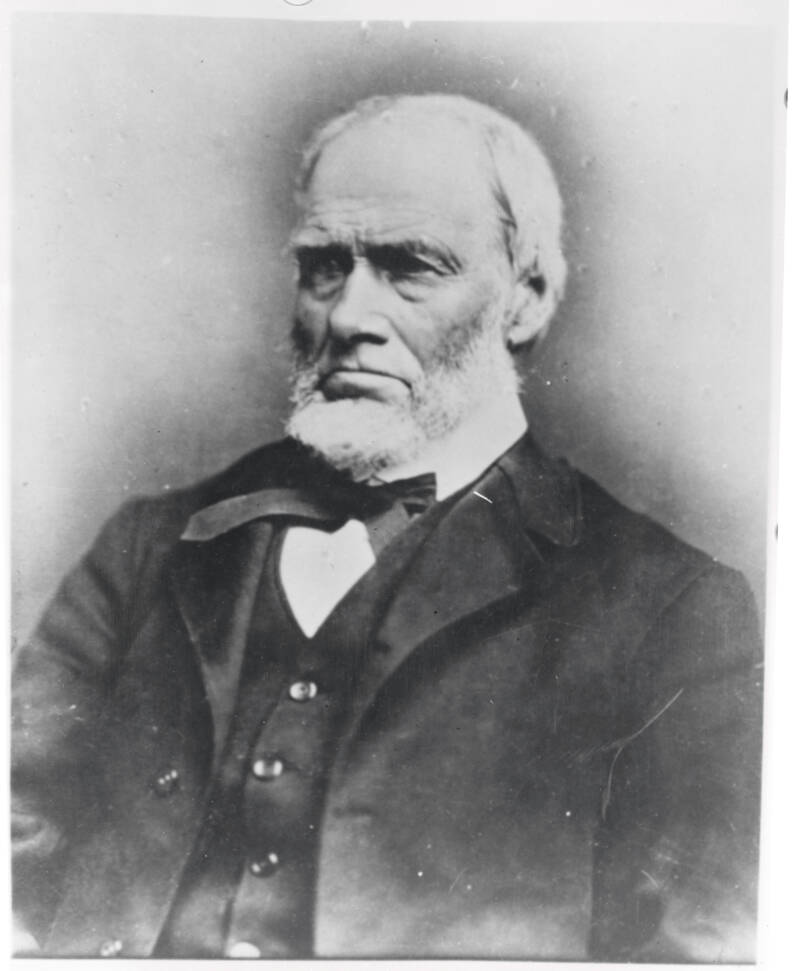 Indeed, Marshall and Sutter tried to keep the discovery of gold at Sutter’s Mill under wraps — but word soon got out. HISTORY reports that stories about the discovery of gold started to run in newspapers that March, and storekeeper Sam Brannan caused waves in San Francisco when he displayed flakes of gold discovered at Sutter’s Mill around the city.

Before long, according to the Library of Congress, San Francisco became a ghost town. Merchants, sailors, soldiers, and laborers alike dropped everything and headed into the California hills, hoping to strike it rich.

The Rise Of The California Gold Rush

Before long, news of the California gold rush spread across the world. PBS reports that thousands of eager prospectors sailed to California from Hawaii, Oregon, Mexico, Chile, Peru, and even China. Though Americans on the East Coast initially doubted that gold had been discovered in the territory, they were convinced by the end of the year when President James K. Polk confirmed it.

“The accounts of abundance of gold are of such an extraordinary character as would scarcely command belief were they not corroborated by the authentic reports of officers in the public service,” Polk wrote, per HISTORY.

Nearly 100,000 people poured into the state by 1849. The so-called “49ers” sailed 17,000 miles around Cape Horn, traversed Panama, or made their way across the Great Plains. While some dreamt of finding gold, others realized that there was money to be made by supporting the miners in jobs ranging from merchants to dance hall girls. 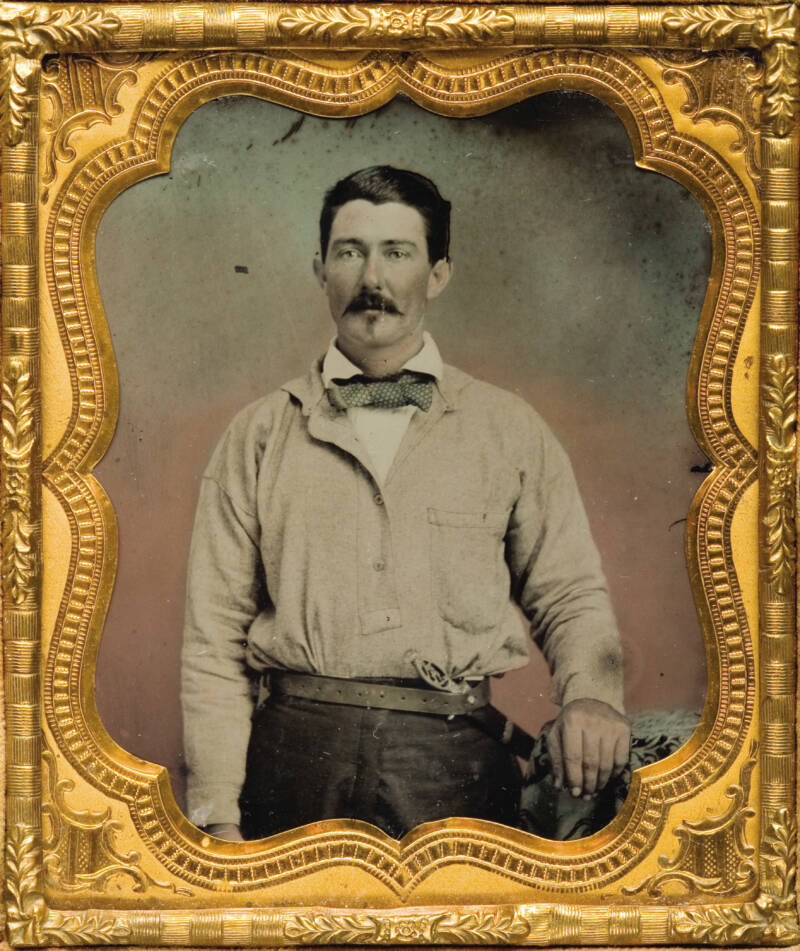 Molina Photographic Company/Buyenlarge/Getty ImagesA portrait of a “49er” with a knife in his belt.

“A smart woman can do very well in this country,” one woman who went west during the California gold rush wrote, according to the Women’s Museum of California. “[T]rue, there are not many comforts and one must work all the time and work hard, but there is plenty to do and good pay.”

But the gold rush had a dark side, too. PBS reports that white miners could be territorial and violent toward immigrants. And Native Americans in California suffered in great numbers, losing a full third of their population to disease, mining-related accidents, and murder, according to HISTORY.

In addition to the loss of so many indigenous residents, around 300,000 hopeful prospectors from around the world had flooded California by 1855. The demographics of the state were forever changed — but that wasn’t the only effect the gold rush had on the region.

The Lasting Impact Of The California Gold Rush

Though the California gold rush sputtered to an end around 1855, it cast a long shadow over American history in more ways than one. As National Geographic notes, it transformed California by turning quiet towns like San Francisco and Sacramento into humming metropolises. 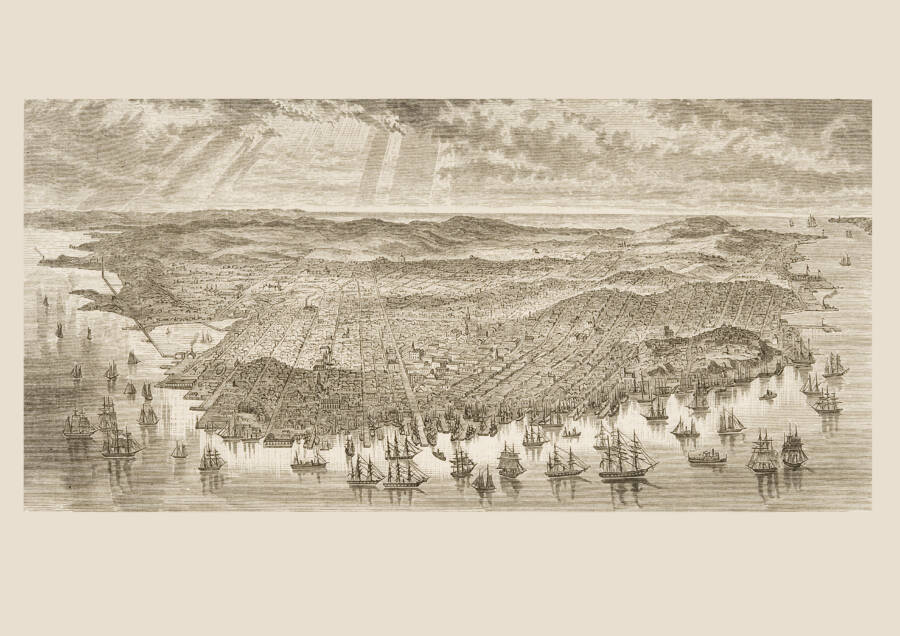 And the gold rush had political implications as well. As HISTORY reports, it likely fast-tracked California’s admission to the Union — but also added to existing tensions between North and South. Though California entered the Union as a free state, the Compromise of 1850 dictated that the new states of Utah and New Mexico could make their own decisions about slavery.

Just a decade later, the Civil War broke out.

In that way, the California gold rush represents a crucial chapter in American history. Not only did it add to existing political tensions, but the possibility of untold wealth also completely transformed the “Golden State.”

Above, look through 33 photos of the California gold rush that capture this stunning moment in American history.

After reading about the California gold rush, look through these photos of the Klondike gold rush. Or, discover the story of Slab City, the squatters’ paradise located in the California desert.

Big Lurch, The Rapper Who Killed And Ate His Roommate